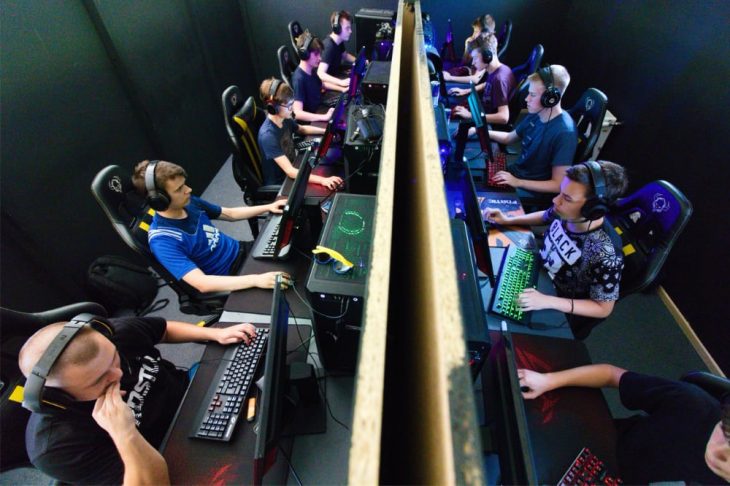 eSports Academy is chapter 17 of Insights from the Future, a book I’m writing about technology, innovation, and people … from the perspective of the future. Subscribe to my newsletter to keep in touch and get notified when the book publishes.

It’s a tough middle school schedule: Two hours of gaming on the latest computer equipment, a PE class to stretch and get the kinks out, a little bit of English, Math, and Science, and another two solid hours of gaming.

That might sound like fun, or the average teen’s afternoon and evening, but it’s the regular schedule of classes as the new eSports Academy in Los Angeles, California. Plus of course, a heavy three-hour homework assignment: more gaming.

And, sometimes, a bit of math.

“It may seem like it’s all fun and games, but games are serious business these days,” Dean Hardwick, principal of the brand-new grades 4-7 school told me yesterday. “The average salary for gamers on the big eSports teams these days is easily $300,000/year.”

The eSports economy has ballooned from just a couple billion dollars a year to over $25 billion in 2027, according to Newzooz, a gaming analyst firm. That’s significant: over 300,000 people are now employed in the industry, and professional gamers make up almost 50,000 of them.

Plus, the industry’s growth rate is still in the high double digits, meaning it’s continually expanding.

That’s music to the ears of students like Dawn Rodriguez, who has been working hard at her favorite game, Gareena Free Fire, for over five years now.

“My goal is to get on one of the big teams,” she told me. “I know it’s lame, but I’ve always liked the Patriots in the NFL, so I’m looking forward to joining their eSports affiliate battle royale team.”

The Patriots need the help. Their eSports franchises haven’t won a championship in three years now, and their Gareena Free Fire squad is currently below the Bengals in league standings.

While she’s not a pro yet, Rodriguez has over 500,000 followers on Twitch who watch livestreams of her gameplay — and ads. As a result, she more than pays her own way.

“This school is expensive, but since they allow streaming during school hours, Dawn has covered all the costs of her education,” mother Maria says. “I’m so proud of her. She’s already on the radar of all the eSports scouts, and if she doesn’t decide to turn pro right after middle school, I’m sure she’ll get a scholarship to UCLA or Berkeley.”

Others aren’t so sure eSports Academy is a good thing.

“What about history? What about arts? What about all the other subjects?” professor Boone Sawatski asks. He’s the dean of the school of education at Harvard. “Is school just about training someone to slot into a niche in the job market, or is it about building well-rounded, intelligent citizens?”

One thing it’s most certainly about, at least in Los Angeles, is money.

The eSports Academy may be new, but in a school system burdened with debt and riddled with strikes, it pulled in a profit of over $10 million last year, according to publicly-available data.

Again, this is a chapter from Insights from the Future, a book I’m writing about technology, innovation, and people … from the perspective of the future. Subscribe to my newsletter to keep in touch and get notified when the book publishes.